In Part I, I suggested the use of b-flute
for packaging books on the basis of its meeting three criteria: a high level of
protection for contents, high speed of packaging and low cost of materials.
Today I’ll explain in detail how to use b-flute.

First, a list of tools and supplies
you’ll need.

There are many brands available, many are
no doubt adequate, but don’t skimp on price. You’ll need something that will
hold up under heavy use and have the capacity to staple through 4 to 6 layers of
b-flute. It’s also important to buy the type with an arm that angles sharply
upward so that the head of the stapler will clear the package when in use. I use
a Bostich 00540. It’s about $60 or $70 new.

There are some booksellers who use tape
in lieu of a stapler. The two most common reasons cited for this are the
difficulty of opening a stapled b-flute package and complaints received from
postal clerks who have been pricked by staples with partially open legs. Stapled
b-flute packages can be difficult to open with one’s bare hands, but bring a
sharp knife or scissors to the task – simply cut off one end – and there’s your
book. If partially open staples are an issue, this can be quickly addressed by
taping over the legs.

There are two reasons I don’t recommend
using tape only. First and most importantly, the closing points on the ends of a
taped package are further from the enclosed book and therefore don’t exert the
same protective pinching action that staples do. It’s more likely, that is, that
the book will be able to move inside the package. Second, tape is expensive and
more time-consuming to apply; staples are fast and cheap.

This is an optional tool, but I wouldn’t
want to be without mine. You’ll see why later. Again, shop for quality, also a
capacity to cut through several layers of b-flute at once. And do get the
guillotine type. I use a Boston 2612 (discontinued, I think), and it gets the
job done, but I’m strongly considering upgrading to one with a 15" cutting
capacity. Prices vary widely – $30 to $100 or more – but I see many used ones at
sales. Since most of these have self-sharpening blades, the age of the tool
usually isn’t an issue.

There are many brands, and quality varies
here as well. I’d spend at least $8 to $10 on this.

3" wide, clear. Experiment with different
thicknesses until you find the thinnest one that will do the job for you. Too
thin, and you’ll have problems with the tape breaking and/or sticking to itself;
too thick, and you’ll be spending more money than is necessary. Buy in bulk;
this is an expense that can add up fast.

You could use a box cutter, but this
would expose a blade to your work surface. Better to use sharp scissors – and 8"
Fiskars work great. You can simply push the open scissors into a seam and make a
clean, fast cut.

This assumes you’ll be using sealed poly
bags to waterproof your books. You can also use Zip-loc bags or, alternately,
tape poly bags closed, though the latter may not give you as good a seal and of
course will consume more of that expensive tape. In any case, a good impulse
sealer can cost over $100 but will save you time and money in the long run. Get
a 12" capacity sealer minimum. 16" or 20" is better, and, if you can afford it,
get the type with a built-in cutter.

Definitely buy these in bulk. Two or
three sizes will accommodate most books, and the excess you burn off can often
be used for smaller books. A 2 mil thickness is fine for books that will be
subsequently wrapped in b-flute. If you’re using the poly-bag-on
the-outside-method, you’ll need 4 mil.

The most important consideration here is
the location of your supplier. In almost all cases you’ll save a significant
amount of money buying your b-flute locally. Check your yellow pages for
listings under packaging or shipping supplies. Sometimes paper suppliers will
carry it. Numerous vendors will ship b-flute to you, but shipping costs can
equal 50% or more of the cost of the b-flute itself – and worse, shipping rates
will be going up in 2007. Typical prices for a 250′ roll of b-flute are $12 for
12" widths and $18 for 18". 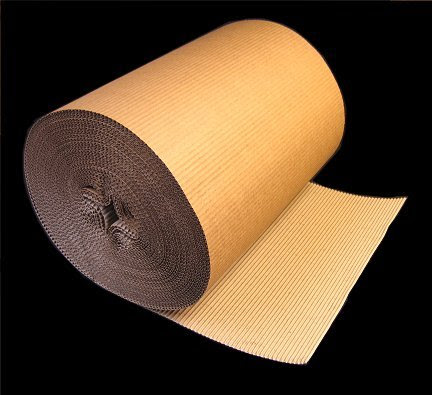 The packaging process for most books is
alarmingly simple. After sealing the book in a poly bag, drop it on the b-flute.
It can be parallel or perpendicular to the orientation of the flutes. 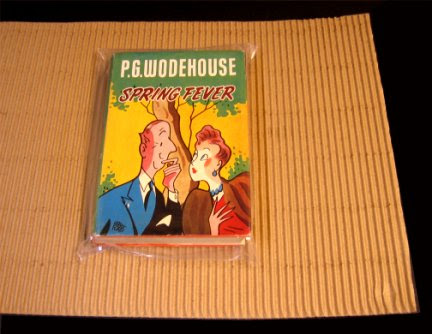 Next, line up the end of the roll
parallel with and near to but not quite meeting the spine of the book. 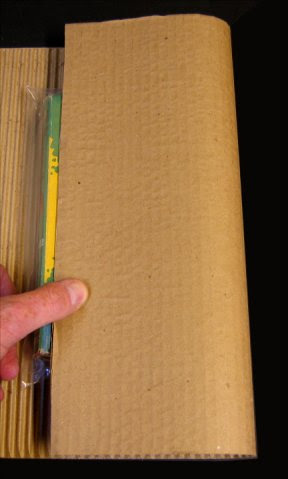 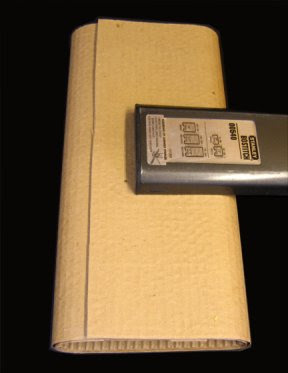 Next, tape the seam and push the book
through the package until a portion of it extends out the other end. This latter
step enables you to staple the opposite end with absolutely no danger of
penetrating the b-flute with the head of the stapler.

Pick the half stapled package up and tap
the stapled end on your work surface until the book is snug against the closed
end. Staple the other end (see tips below) – and you’re done, usually in well
under a minute. 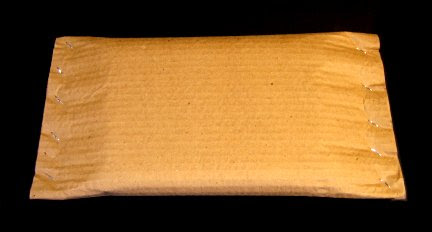 Most staplers don’t have blunt or
protective tips, and it’s especially easy when packaging thicker books to
penetrate the b-flute with the head of the stapler. Not good. There are several
things you can do alone or in combination to virtually eliminate this problem.
First – this is more important than any other tip – round over the leading edge
of the stapler head. Usually, the tip is made of relatively soft metal, and a
few minutes with coarse sandpaper or a Dremel tool will get the job done. This
step alone may prevent almost all of your tear-through. Also, staple at a
45-degree angle to the end of the package. This at least eliminates the
possibility of both corners of the head penetrating the b-flute. Generally, if
only one corner of the stapler penetrates, it won’t affect the strength of the
connection much. 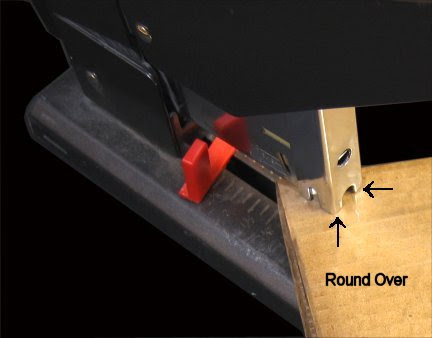 Other preventative tactics include
pre-pinching the end of the package before stapling, lifting the opposite end of
the package slightly off the work surface (to reduce the angle of penetration),
and taping over the ends of the package to add a protective layer to the
b-flute. Finally, if possible, store your b-flute in a relatively humid
environment. It will become somewhat brittle at low levels of humidity and more
prone to stapler head penetration. If this sounds at all complicated, don’t
sweat it. With practice, you’ll soon be stapling quickly with no or almost no
tear-through.

By the way, I’ve seen b-flute tutorials
that suggest tucking in the corners of the ends before stapling. 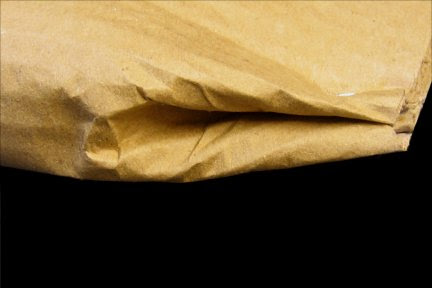 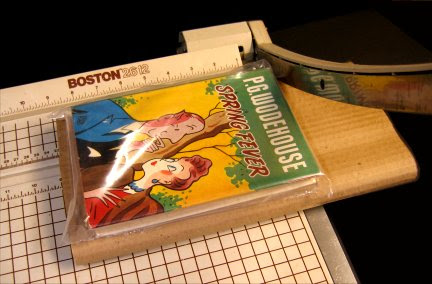 Thin items cross-packaged with method #1
often are too large for these envelopes as well. In this case, I "make my own"
cardboard, again with b-flute. Using a paper cutter I cut four rectangles
slightly larger than the item, two with corrugations oriented in one direction,
two in the other, make a sandwich, and seal it with the item in a poly bag. 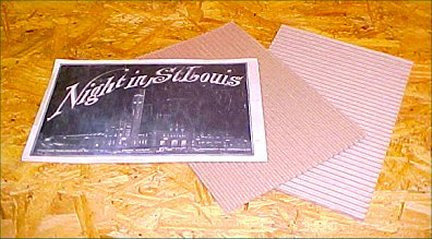 Finally, what about valuable books? Even
though a b-flute package will almost certainly deliver them safely, I’m a total
chicken when values rise into three or four figures. I still use b-flute but
shove the package inside a box!

Thanks to Craig Stark of
www.bookthink.com for permission to
reprint.

Ready to get started, find the
supplies you need by Clicking
Here:

Great article! The information on how to ship books is really useful. If you want to ship a book for your friends or family as a gift, this is how it should be done. Also, you can use old boxes and get the b-flute portion to save on your shipping supplies cost.